The Relentless Pursuit of Beauty

I had the distinct pleasure of meeting innovative Las Vegas artist A.D. Cook when I attended a charity event last year where his work was being featured. I had just entered the room and immediately the sensual image of a nude young woman with her back to the camera perched on an easel in the far right corner caught my eye. I assumed it was a photograph, but as I moved closer and closer, eager for a better look, I realized it was an original painting, so real that even a few inches away my mind insisted it was a photograph. Instinctively I began to search the room, wondering if the artist was present and lo and behold the entire space was full of artwork. There were other figurative pieces similar in style to the one that had caught my eye, aptly named “Ardor”, but mingled among these paintings were also abstract pieces on metal, which spoke to a very different point of view. Now I was on the prowl to locate two artists who had both engaged my curiosity. Moments later I was introduced to A.D. Cook and I quickly learned that both the figurative paintings and the abstracts on metal were his work. I must admit I was instantly a devoted fan of both the paintings and the artist, who seemed to connect with everyone around him. I knew I was in the presence of great talent. 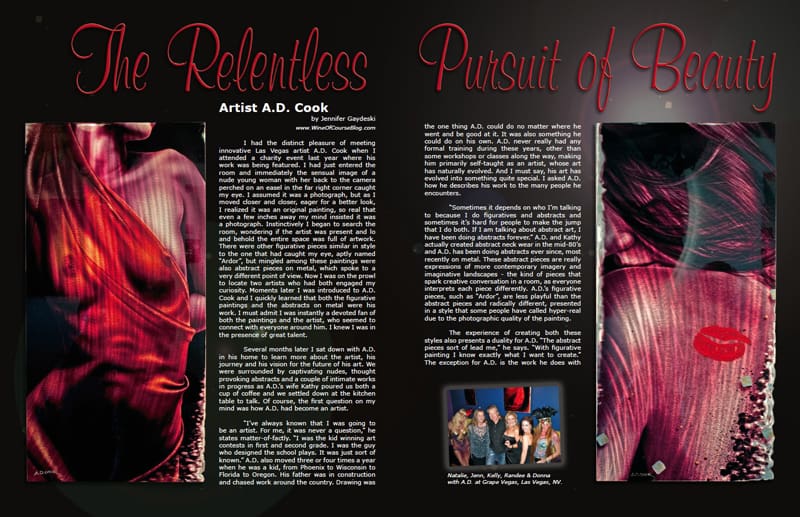 Several months later I sat down with A.D. in his home to learn more about the artist, his journey, and his vision for the future of his art. We were surrounded by captivating nudes, thought-provoking abstracts and a couple of intimate works in progress as A.D.’s wife Kathy poured us both a cup of coffee and we settled down at the kitchen table to talk. Of course, the first question on my mind was how A.D. had become an artist.

“I’ve always known that I was going to be an artist. For me, it was never a question,” he states matter-of-factly. “I was the kid winning art contests in first and second grade. I was the guy who designed the school plays. It was just sort of known.” A.D. also moved three or four times a year when he was a kid, from Phoenix to Wisconsin to Florida to Oregon. His father was in construction and chased work around the country. Drawing was the one thing A.D. could do no matter where he went and be good at it. It was also something he could do on his own. A.D. never really had any formal training during these years, other than some workshops or classes along the way, making him primarily self-taught as an artist, whose art has naturally evolved. And I must say, his art has evolved into something quite special. I asked A.D. how he describes his work to the many people he encounters.

“Sometimes it depends on who I’m talking to because I do figurative and abstracts and sometimes it’s hard for people to make the jump that I do both. If I am talking about abstract art, I have been doing abstracts forever.” A.D. and Kathy actually created abstract neckwear in the mid-’80s and A.D. has been doing abstracts ever since, most recently on metal. These abstract pieces are really expressions of more contemporary imagery and imaginative landscapes – the kind of pieces that spark creative conversation in a room, as everyone interprets each piece differently. A.D.’s figurative pieces, such as “Ardor”, are less playful than the abstract pieces and radically different, presented in a style that some people have called hyper-real due to the photographic quality of the painting.

The experience of creating both these styles also presents a duality for A.D. “The abstract pieces sort of lead me,” he says. “With figurative painting, I know exactly what I want to create.” The exception of A.D. is the work he does with figurative on metal. They cross a chasm between the fine detail that he puts into canvas/linen paintings and the free-form process that defines the abstracts. A.D. has done figurative on metal for a long time. In fact, he has been doing figurative since he was a kid when he would make a little pocket money by doing drawings of Raquel Welch or a schoolmate’s girlfriend. These drawings were a technical challenge for him as he continued to hone his talent. A.D. believes in, “Just doing it. That’s the best way to learn. If it doesn’t work out, do it again.”

A.D. is still learning today. His prolific body of work speaks to the growth and exploration of the possibility that defines him as an artist who is continually looking to the future. He particularly enjoys doing commissions for discriminating art collectors. His figurative portrait commissions begin with a custom, professional photoshoot event in a photography studio and progress throughout the painting process to a final unveiling. Creating these heirloom originals on canvas and linen are his particular joy and raison d’etre. In fact, A.D.’s current body of work only includes originals, so owning an A.D. Cook piece is very special.

When I asked A.D. where he sees his art going, he said, “I think the best way to describe it would be ‘epic pieces’ – large statements, whether they be abstract or figurative, particularly in Vegas.” These large scale pieces would be a broader canvas for A.D. to make a statement with his work, and I was intrigued by his connection to Vegas. “There is a lot that can be said in a town like this. Vegas is really all about art. I think it provides a lot of creative energy that can be expanded upon.” I was curious if this vibe was what had inspired A.D. to settle down in Vegas in recent years. “Kathy and I eloped to Vegas twenty-six years ago,” he says, “and we came here for our anniversary every couple of years. Every time we came here we would say how we needed to move here. Vegas is more in line with the kind of work I want to create.” I would agree that the sensual nature and edgy content of A.D.’s work lend itself to the tastes of Sin City, but I believe that his work is also timeless, whether the pure expression of a nude painting or the stimulating ambiguity of abstract on metal. A.D. Cook has spent a lifetime creating art and has collectors all over the world. He will no doubt continue to remain relevant and inspiring no matter where his artistic journey may take him.

Featured in this article: