Born with a Passion to Create 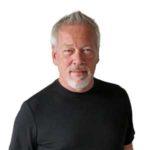 A.D. Cook realized from an early age that he was born to be an artist. Beauty inspires him as he seeks grace in the lines and form of the female figure – which is to him, the ultimate beauty. There is nothing he would rather paint and his art is a reflection of that classical ideal.

A.D.’s art has been showcased in fine art galleries from Key West to Hawaii. His innovations have been featured and unveiled at ArtExpo in New York City. His work has been honored and showcased in a myriad of books and magazine publications including Art Business News.

During the late 80′s through the early 90′s, he served as the marketing force behind the massively successful and fast-growing Hollywood Video stores. During his five-year tenure, he created and managed their corporate identity. His greatest joy at Hollywood Video was painting dozens of large-scale wall murals of movie stars and Hollywood personalities for stores nationally.

After leaving Hollywood Video in 1994, he continued to refine his creative skills. A decade ago, his search for the perfect inspiring genre led him to focus predominately on figurative fine art. Always a fan of classically beautiful women, he was propelled to begin collaborating with contemporary muses in order to explore the creation of epic original art, which celebrates their timeless beauty.

As an innovator, A.D.’s canvas prep techniques are referred to and revered as an industry-standard in the world of figurative fine art and his metal preparation videos for artwork are among the most-watched online.

Today, the artist creates original fine art nudes and figurative artworks on hand-ground metal and specially prepared canvas. Most are painted life-size and larger and feature a contemporary approach to this time-honored genre. His imagery bursts out of traditional art forms leaving viewers appreciating their sensual nature, beauty, and detail. A.D.’s metal creations have been compared to sculpture and holographic mediums – there’s a dimensionality and motion visible in every piece.

The use of imagery and materials in his work is inspired and intentional. Along the way he has created manifestations of the unexpected, provoking the viewer to explore new and perhaps unexplored ideals of beauty – to see beyond the figure and interpret the deeper message in the artwork. The very nature of his artwork provides long-lasting beauty and enjoyment.

A.D. resides in Las Vegas, Nevada where he finds inspiration in the flood of imagery and the stimulating energy that permeates the city.